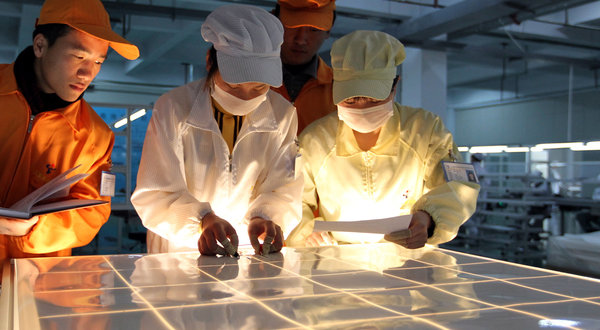 Quarterly solar photovoltaic (PV) demand in the Asia-Pacific (APAC) region is forecast to reach the 10 gigawatt (GW) level for the first time, in the fourth quarter (Q4) of 2014. According to the latest Solarbuzz Asia Pacific Major PV Markets Quarterly report, annual APAC PV demand in 2014 is forecast to grow 19 percent over the previous year, driven mainly by a year-end installation rush in China, as well as strong growth in Japan.

Overall, the APAC PV demand is forecast to continue growing and maintain shares in global PV market at over 50 percent level in 2015, said SolarBuzz, now part of IHS. China contributed the most demand in the APAC PV market in Q4 2014, although China’s PV demand was weaker than expected in the first three quarters. Ground-mount projects still dominate the Chinese market, as the building-mount segment supported by distributed PV subsidies slowly builds up.

«Although the National Energy Administration recently announced that only 3.8 gigawatt PV systems were connected to the grid, during the first three quarters of 2014, many projects have already begun construction,» said Isabella Ni, China analyst for Solarbuzz.

«With a year-end surge of installations in the fourth quarter, even after three weak quarters, full-year PV demand in China will exceed its 2013 level.»