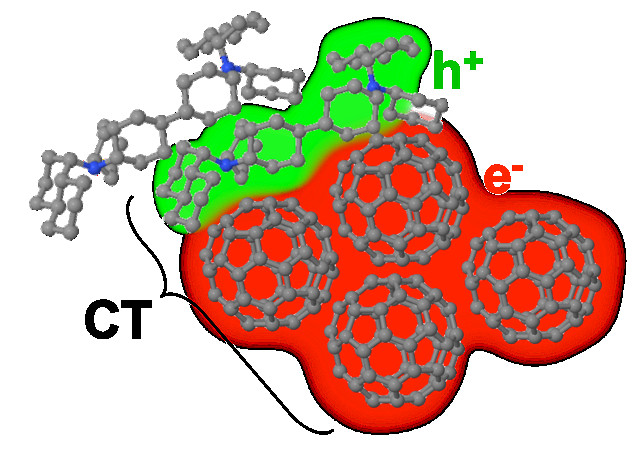 The goal of making cheap organic solar cells may have gotten a little more approachable with a new understanding of the basic science of charge separation presented in a paper published online today, February 3, in Nature Communications. Co-authored by Penn State electrical engineer Noel Giebink with lead author Bethany Bernardo, an undergraduate in his group, and colleagues at IMEC in Belgium, Argonne National Lab, Northwestern, and Princeton, the paper suggests design rules for making more efficient solar cells in the future.

Organic solar cells currently have a top efficiency of approximately 10 percent in the laboratory, much less than inorganic single crystal silicon. One of the challenges to realizing efficient organic cells lies in separating the strongly bound pairs made up of a negatively charged electron and its positively charged hole that result from light absorption, collectively referred to as an exciton. The electron and hole need to be separated in order to make a current.

The way this is done is by creating a heterojunction, which is two different organic semiconductors next to each other, one of which likes to give up an electron and the other which accepts the electron, thereby splitting the original exciton into an electron and hole residing on nearby molecules. A long-standing question in the field, however, is how the nearby electron and hole — still strongly attracted to each other at this stage — manage to separate completely in order to generate current with the efficiency observed in most solar cells.